Hi there,
here is the minimal code (extracted from OTA.h) i found working to integrate .Air OTA within blynk script quickly without the need for Edgent sketch, hope that helps somebody:

I’ve just been testing this, and found that I needed to use the SSL version of the Blynk library for this to work. If I use the non-SSL version (BlynkSimpleEsp32) then the BLYNK_WRITE(InternalPinOTA) callback is never triggered during normal running of the sketch.
Oddly though, it is triggered when the device is rebooted and re-connects to Blynk and this is without any BLYNK_CONNECTED callback in my sketch.

I had tried producing my own version of a minimal sketch before, and couldn’t get past this point, but that was almost certainly because I wasn’t using the SSL library.

A couple of other points…

The original code has a Blynk.disconnect() before the http.begin(overTheAirURL) command, so that Blynk doesn’t interfere with the update process. It might be worth adding this back in?

Also, adding the firmware version line from the Edgent sketch to the top of the code can be useful…

as this allows you to use the “Lower Firmware Version” rule from the Blynk.Air screen in the web console.

Thanks for posting this, it was extreemly useful.

Thanks Pete, glade to hear that it was useful.
I tested this using BlynkSimpleEsp32 (not the SSL version) and worked fine and tested it again before replying here, But failed with BlynkSimpleTinyGSM.
You are right omitting Blynk.disconnect() was no good at all.
And yes defining firmware revision is very useful. I used it at least to verify that the shipment was successful.

Ibrahim_Roshdy, PeteKnight, thanks for this OTA example, everything works in my project based on the BlynkSimpleEsp32.h library.

Note that if you added the Blynk.disconnect() line; you will need to put a Blynk.connect(); berfore each return(); in case of update failed.

Hello friends.
Please help me on this topic.

As the topic instructs the code, the aim is to use the “BlynkSimpleEsp32.h library” to update via Blynk Air without using Blynk.Edgent.

I take an example of the code used to turn on and off the D4 blue light on this Nodemcu.

Please help me insert the code to support updating via BlynkAir.
In case you are using ESP32, please write and run on it for testing, I will re-code it myself to match my esp8266.

Thank you very much.

It’s always a good idea to add the #include lines together near the top of your sketch, so those two lines would go there.

The rest of the code can go anywhere, provided it’s not inside an existing function, so the simplest place it to tag it on to the end of your sketch.

However, I still have not been able to update, the error appears as detailed image attached.

Do you have a way to test it for me?

Since ESP8266 core version 3.x.x the http.begin command now needs to know the transport method (WiFi) as well as the server url.

I’m sorry, I’ve revised the code as you instructed, but the update status is still the same as before.

Maybe you should add some serial print commands to the sketch to see how the OTA process is progressing and where it’s failing.

You should also be 100% sure that the new .bin file is correctly compiled for the board you’re using.
I’d also swap to using a three digit version number rather than four.

Thank you for your response.
And here is my Serial Monitor.

Now it’s too late in my country. so I’ll come back later. Thank you for your interest.

I’ve just tested your sketch (after making the changes to the http.begin command and changing to a three digit firmware version (“1.1.2”) and it works fine… 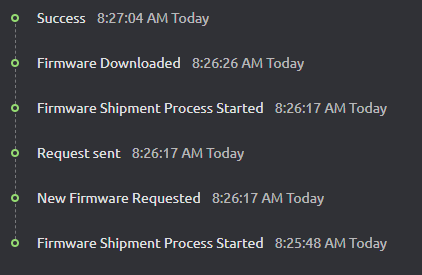 Thank you, Peter.
I’ll check it out and see how it goes with me.
Thanks very much.

Dear Peter.
I tried to run the code again, but still the error.
I hope you can update your full code so I can test it, then I can fix it.
Thank you so much.

This was the sketch I used…

Dear PeteKnight
I used your code and edited the parameter according to my device.

However, the error is still the same.

Do you think the problem could be caused by this command line library error?

Do you think the problem could be caused by this command line library error?

No. It works perfectly for me.