The old version of Blynk will be retired at some point, you should start planning your migration to the new version

A new version of Blynk has been released, and the old version will be retired at some point in the future.

The new version of Blynk

The new version is being referred to on the forum as “Blynk 2.0”, but the new product consists of a number of elements, correctly referred to as follows:

Blynk.360 (Blynk.Console)
A Web portal which is used to configure and manage devices, users, data and organisations. This is currently known as Blynk.360, but will be re-branded as Blynk.Console to better represent its function.

Blynk.Edgent
The Blynk hardware library, currently only available in C++ with a version number of 1.0.0

Blynk.Air
An over-the-air (OTA) service to remotely update the hardware firmware from Blynk.360

You can sign-up to the new version here:
Pricing | Blynk IoT Platform

The Free price plan supports one hardware device and additional devices can be added for a one-off cost of $4.99
The Plus and PRO versions require monthly subscriptions and allow additional features to be added to the subscription.

Blynk have now provided more info on the widgets tha will be available with the Free plan, compared to the Plus/Pro plans. The details are:

All Basic Widgets and

There are other restrictions on the Free plan, such as historical data storage being limited to 1 week, and no ability to export this data to CSV.

About the old version of Blynk

The old version of the Blynk app is now referred to in the App/Play Store as Blynk 0.1 (Legacy) and Blynk (old).

Blynk has stated that there will be at least 6 months of guaranteed support for the old cloud servers (this was said in early June 2021).
If you currently have projects on the old cloud servers and are using the old app then you should start planning to migrate to the new app.
There is no automatic conversion process, because much of the underlying functionality has been re-written, and much of the setup for your projects (Templates) now needs to be done via the web portal.

If you run a local Blynk server then you potentially have a longer period of time in which to migrate, but presumably the old app will be removed from the App/Play Stores and even if it isn’t, new releases of iOS and Android may break the old app.

This is not an official Blynk announcement, it’s simply my understanding of what Blynk is currently planning to do with the old Blynk product in future.

App Sharing
Can I still share my app with my friends, family, pets etc?
App sharing in the old version of Blynk was fairly crude, with no ability to control the access rights of individuals, and no audit trail of who took certain actions.
In the new version of Blynk this works very differently, with an organisational structure which allows different users to have different access rights. The free version of the new Blynk product allows up to 5 users to be defined. If you need to share your device with more users then you’ll need to go for the Plus or PRO subscriptions.

Local Server
Can I set-up a local server and avoid paying the Plus/Pro subscriptions?
Local server isn’t currently an option for the new version of Blynk, and if it is introduced at some point in future then it will probably require a subscription.

Documentation
Where can I find the documentation for Blynk 2.0 ?
The best place to start is here:
Introduction - Blynk Documentation

I have purchased energy on hundreds of accounts for my clients. Suspending the old platform will expose me to paying huge amounts to migrate to the new platform, or I will lose the customers’ trust, but it is illegal to stop the old platform without compensation to the clients.

what happens if we don’t migrate?

Il you don’t want to migrate to new plateform , you need to have your own blynk server.

@wasemooo4 it is illegal to use the old developer version of Blynk for commercial purposes, so you owe Blynk large amounts of money anyway!

Il you don’t want to migrate to new plateform , you need to have your own blynk server.

yes, i only have local server.

there is one other person who has blynk that i manage, so i guess i will have to learn the new blynk to keep helping him regardless.

but i will leave my House on old.Blynk with local server, and hope that the app is not destroyed too quickly by Android…

what happens if we don’t migrate?

If you use the Blynk cloud server then it will simply stop working at some point.
If you move your projects to a local server then you can keep that going indefinitely, provided you are happy to restrict your Java updates, but the big issue will be the app.
Blynk won’t be updating the app to run on new versions of iOS and Android, so at some point an update to your mobile OS will break the old Blynk app.
The app will also be pulled from the app/play stores, so the iOS process of migrating to a new device won’t work, as this relies on downloading the apps again on the new device.
Android users are in a slightly better situation, as they. could save the .apk file and re-use it, but they will still be stuck with an old version of the OS.

For people who are happy to have an old dedicated mobile device just for Blynk then they could probably carry on for years, but for me, the beauty of Blynk is that you can pull your phone out of your pocket and use Blynk to check on and control your Blynk devices and view your notifications. Carrying a second phone just for Blynk, or being stuck with an old phone as your “daily driver” isn’t what I want to do.

is there still a web-based software for emulating android apps? is that a potential methodology to keep blynk running after OS phone updates?

called something Blue ? maybe i will do a websearch…

edit - BlueStacks is the one i was thinking of…

I use NoxPlayer and LdPlayer
I emulate android 7.0

I have used NOX and at one time MeMU. They are heavily oriented for “gaming” but worked.

It was easer for me to just use a dedicated older but still functional tablet or phone, on a stand or stuck to a wall.

but the old is better

Yes, I confirm , old is better except new gauges. 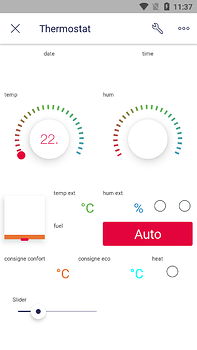 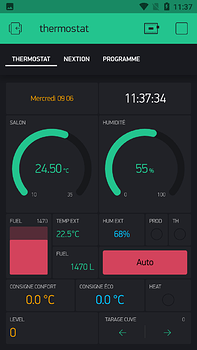 Personally, I don’t like the new gauges, the look like old rotary volume control knobs. Mrs K thought she could turn the knob to turn the temperature up

I’m playing, but I don’t understand why I can’t upload values

I don’t understand why I can’t upload values

How are your datasteams configured in the web portal, especially the MAX values?
If the data you send is higher than the MAX value that you’ve defined it will be ignored, and the default value seems to be 0

Yes I know that.
But the string are not uploaded too

And the default string value I defined in the stream board are not uploaded in the web dashboard.
Don’t worry, it’s my first try.
I have to learn from scratch

Might be worth putting the virtualWrites in a BLYNK_CONNECTED function, or running them on a timer, just to be sure that you actually have a connection when the sketch is trying to push the data.

Yes you are right.
I’ll try that