It’s nothing spectacular or groundbreaking. It’s yet another ESP8266 (12F) reading a DS18B20 temperature sensor. But, I figured I’d post in case someone finds it useful.

UPDATE: I’ve added tracking and display of the minimum and maximum temperatures and the ability to reset these. See my later post in this topic for a screen shot.

This screen shot is scrolled down. When scrolled up, the gauge is fully displayed and the step control and notification widgets are off the bottom and not visible, at least on my phone. 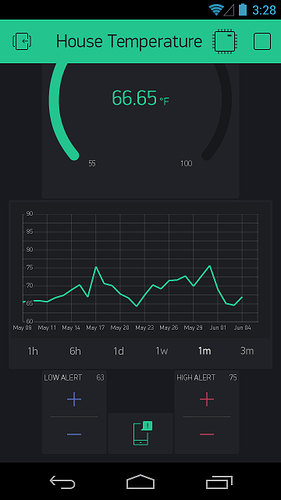 I used a bare ESP8266-12-F module. I mounted and wired it on a piece of prototype board along with a 3.3V regulator, reset and program buttons, and the necessary resistors and capacitors. The red LED just indicates 3.3V power.

Power comes from a 5V charger supply for an old Samsung cell phone (with the connector removed and the wires hard wired to the circuit board).

The DS18B20 is wired to the end of a short length of solid core wires so it can be positioned away from the heat generated by the circuit board.

The case is from a (used) pack of dental floss, with Velcro used to hold it more securely closed. 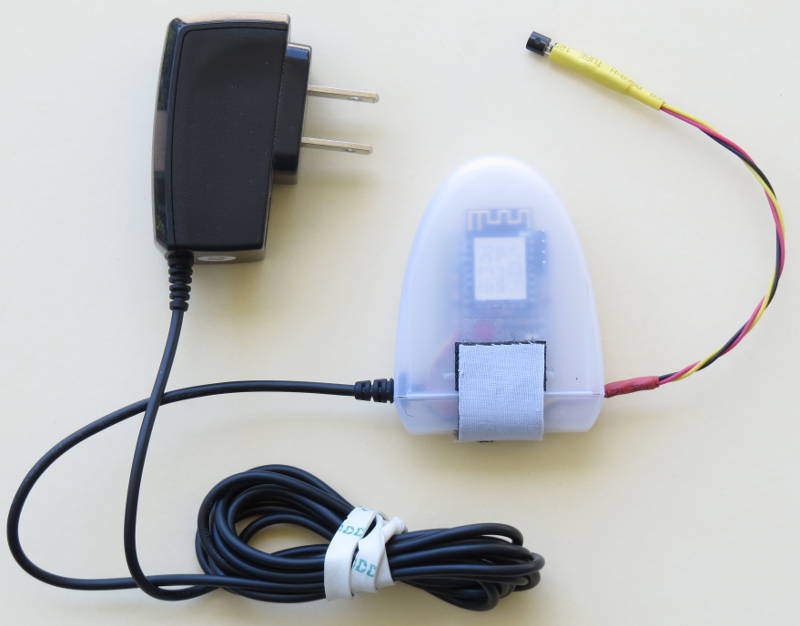 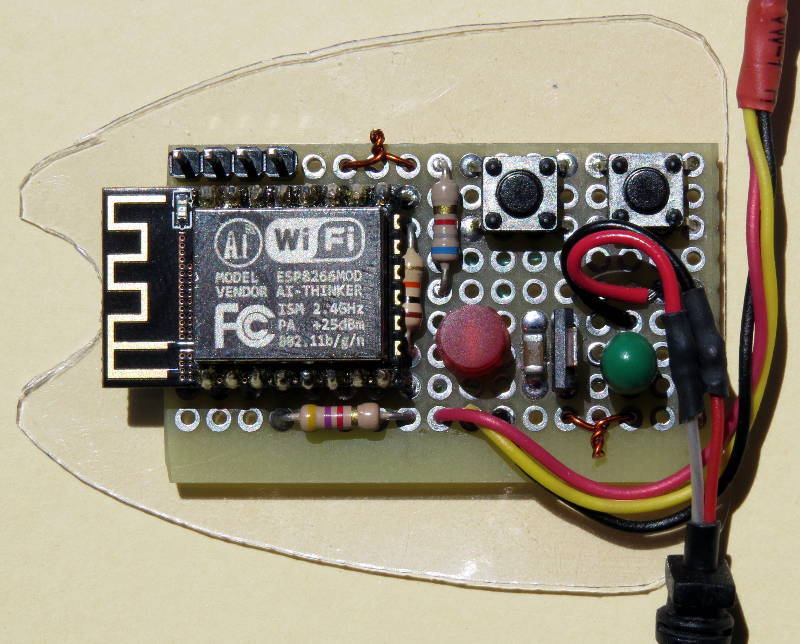 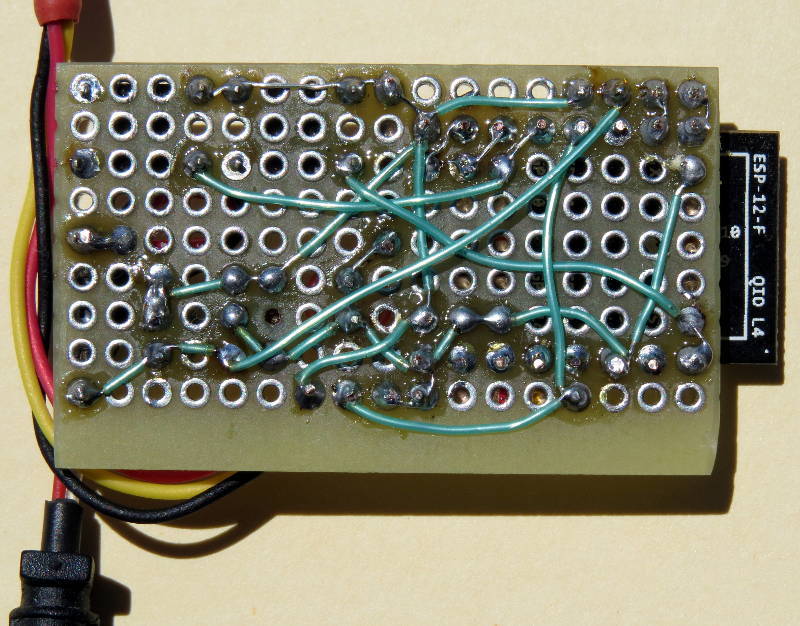 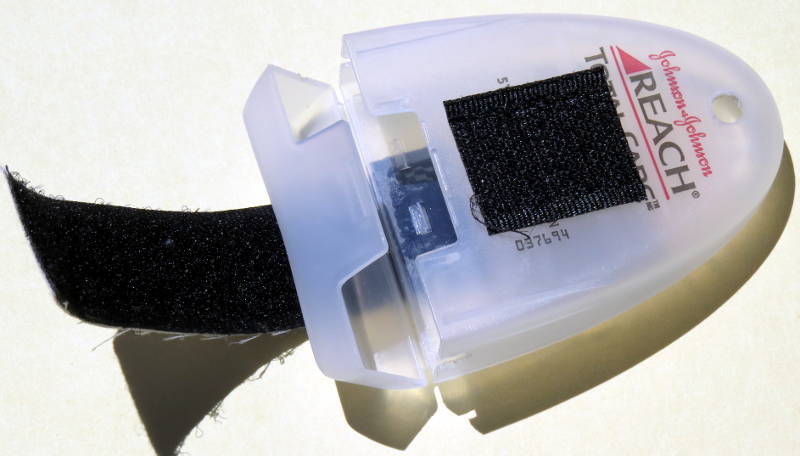 The sketch code, and a schematic of the hardware created with KiCad, are available on GitHub 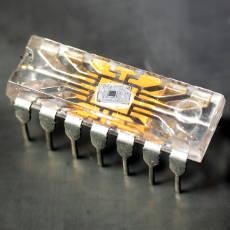 Temperature monitor Arduino sketch for Blynk. Contribute to MLXXXp/Blynk_ESP8266_DS18B20 development by creating an account on GitHub.

Very well done!.. I think I might steal some ideas from your code

@dananmo, It’s just an ESP8266 wired as standard, with a DS18B20 attached to one of the pins (I used pin 4). However, the code is generic for Blynk, and the OneWire and DallasTemperature libraries support all architectures, so it should work on anything supported by Blynk just by replacing the #includes for ESP8266WiFi.h and BlynkSimpleEsp8266.h and setting #define ONEWIRE_PIN to the pin you use for the DS18B20.

I can create a schematic of my exact circuit, if you wish, but it may take a while before I can find the time to do it.

@MLXXXp, as you said: not groundbreaking, but it is nicely done - even the circuit and also the case, i like the idea! plus very organised documentation. good job!

maybe in the next version you can get rid of the psu, and use 1-2 lithium batteries 18650 and a small charger module with micro usb port. if you set the esp to deep sleep, and reduce the measure interval to 5 minutes, you probably could fix the sensor directly outside of the case, because no heat will be produced by the esp.

The simplicity was inspiring so I made a pcb, not realising until afterwards that your own design
governed the placement of my components somewhat

It’s ordered and I hope I didnt miss anything 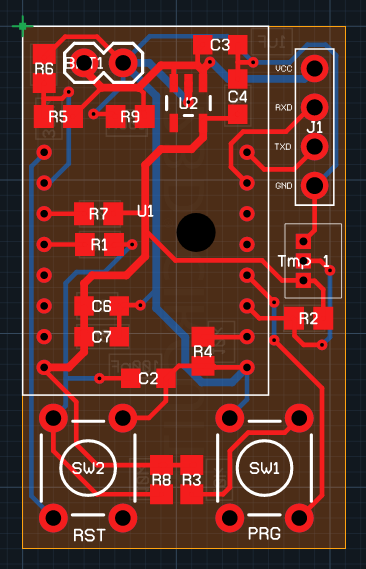 maybe in the next version you can get rid of the psu, and use 1-2 lithium batteries 18650 and a small charger module with micro usb port.

For my purposes, I have no problem powering from the mains. And, I didn’t want to deal with having to charge and maintain batteries.

However, putting an ESP into deep sleep with Blynk has been discussed elsewhere in this forum, and adding that capability to my code base shouldn’t be too difficult.

The simplicity was inspiring so I made a pcb

I took a quick glance at it but haven’t verified it fully. It doesn’t exactly match mine but looks mostly correct.

I used GPIO4 for the sensor. It looks like you’re using GPIO2 (so remember to change the #define ONEWIRE_PIN in the code).

I see you’re using the ADC to monitor the input voltage.

A schematic and PDF of my hardware, created with KiCad, are now in the GitHub repository.

I used GPIO4 for the sensor. It looks like you’re using GPIO2

For an ESP8266-12, GPIO2 is connected to the on board LED, so you’re going to have a conflict. If you want to have the LED status indication that’s in my code, you’ll have to use an external LED on a different pin, or move the sensor to a different pin.

Thanks for the heads up, it’s alright for me this is meant to go inside a solar lamp so it will be hidden

Thank u very much sir

I’ve added tracking and display of the minimum and maximum temperatures and the ability to reset these. 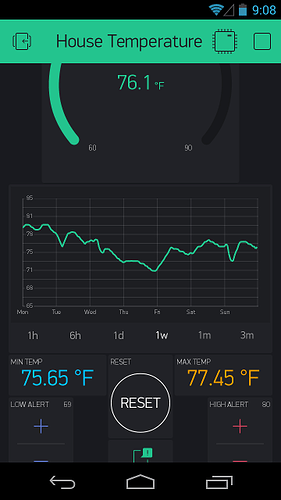 This project uses the History Graph widget, which I believe has been superseded by the SuperChart, but anyway: 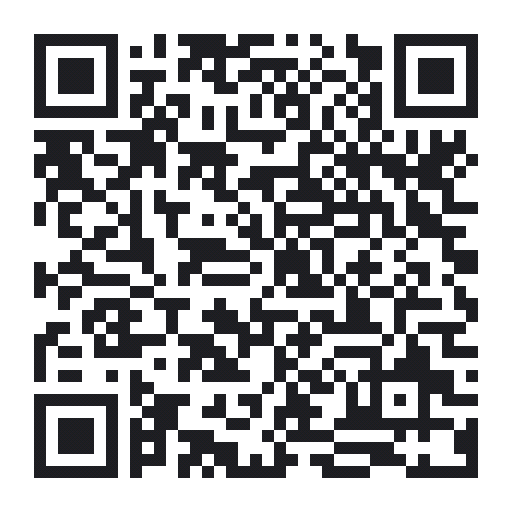 I just wanted to say thanks for posting this - I’ve had Blynk, an ESP12e and a ds18b20 sitting around for a couple years wanting to do this exact thing…but never had the time to work on it. Now I’m up and running! I’m going to use this for making some freezer temp monitors. Thanks for sharing!

How can i add more sensors ?? Need at least 3 sensors…

@Mauricio_Lima, Are you asking about the hardware or the software?

For the hardware, additional sensors can be added in parallel on the same wire. (That’s why the interface is called “1-Wire”.)

For the software, the startSensorRead() function already starts the conversion for all sensors connected to the bus, so no changes are required there.

You would have to expand and modify the sensorRead() function to read all the sensors, instead of just one, and add virtual pins for them. If you put the sensor device addresses in an array, you could use a loop and index to read them.

The initialisation for more than one sensor will have to be performed in setup(), as well. Essentially, anywhere where the tempSensor variable containing the device address is used.

What you have to consider is how to handle monitoring, alerts and errors for more than one sensor. Do you want separate maximum and minimum temperature tracking, and max/min alerts and notifications, for each sensor? What happens when one or more sensors fail but the others remain working, in terms of flashing the LED for status indication?

Very nice and complete presentation of your project!

Since I’m a self proclaimed DS18B20 wrangler

I have some input that might speed things up, even if not necessary

Timers are used to control sketch operation. Even the required “wait for sensor temperature conversion” (800mS) is handled by a timer, instead of a delay, which I haven’t seen any other DS18B20 Blynk sketch do.

The conversation time with 10 bit resolution is only 187.5 ms, so no need to wait for 800 ms. You don’t even have to wait for the 187.5 ms if you don’t want to. You could execute other code and come back after ~200 ms and just read the result of the conversation, which only takes about 30 ms.

As so many other fellow Blynkers, I too want my home to be a little bit smarter than my neighbors. From the beginning I just wanted a scheduler to turn on/off my remote controlled power sockets, but during the process it evolved to also include a receiver. I can now control my sockets with both the physical remote and Blynk seamlessly – AND get the correct status in my phone. But implementing a super regenerative receiver wasn’t without its problem due to its “no signal noise” characteristics …

@Mauricio_Lima There is examples of how to use multiple sensors hidden somewhere in the forum. I can’t remember where so you have to search for your self