It’s editable from the keyboard - just touch the number text.

It is intended to work without clearing the edit field, there will be another widget with clearing sent values and lots of other options, but not soon.

It is intended to work without clearing the edit field

OK, but without even a EOL indication on the assigned variable that can be used for logic control, I can’t seem to find a practical use for this widget… well, not yet

Well, I think it is better the way it is NOW (NOT clearing the text field). Imagine You just want to change one or two digits, but by design you are forced to enter a whole text. But perhaps the text (as a whole) could be selected (highlighted) @BlynkAndroidDev? Then the user could either erase it just by starting typying, or point on the text to unselect it to make corrections.

But anyway: A great update!

Surely, this edit text field works like all other edit fields on Android.

Imagine You just want to change one or two digits

I was under the impression many wanted a smaller Text Input only widget to replace the Terminal when it’s display is unnecessary and/or it’s size requirements are too much.

there will be another widget with clearing sent values and lots of other options, but not soon.

But sounds like that is still in the planning

Well, here is another modification to make a widget work how I at least think it could (and possibly temporary… see my supplanted multi-coloured button above

) NOTE: This is NOT intended to undermine what Blynk has made… just add in my own personal preferences to somthing I wish to use in a particular way. The text Input widget is great… easy to use and compact, compared to the Terminal inpu…

Nice widget collection added on. Numeric input widget has a display issue. Even if we change font size, display size does not change.

If we give a title, it overlays on the top and cuts off a small portion of the displayed value. Very obvious in 7.

Seems dependent on device… some show no change, while others notable, but not as bad as shown.

I don’t know, you tell me! I’m currently using only a terminal for VERY simple command line entering (and it is only test device and firmware). It accepts only two commands: fadein and fadeout. So fade is the common for both. If It would stay on display, I would be able to correct only last chars in or out to “create” a command

OK, another one: A message board (a pager?). I could place a large LED display hanging over in my house, and send from remote location to my wife:“I’ll be back at 4PM, be ready…”. But then a heavy traffic occurred… So instead typing all over again, jus correct “I’ll be back at 6.30PM, be ready…”
I know… the phone is better… but it IS A USAGE SCENARIO

Have you ever seen a numpad always open on a smartphone?

Numeric input does have it… So what’s your request?

Numeric input does have it

I see your point… 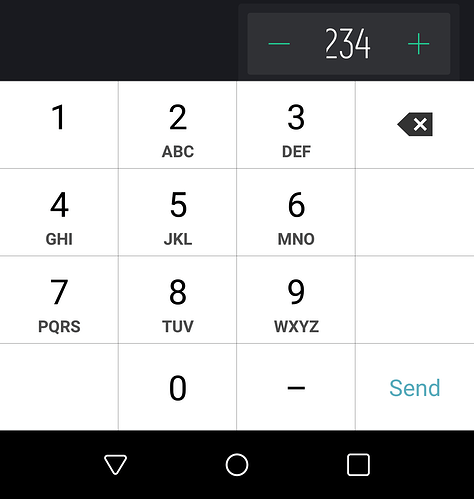 So what’s your request?

I am very visually oriented, so I was thinking more a “always visible” 1/4 to 1/3 screen sized keypad widget for quick and easily intuitive alarm entry, value entry, etc.

But that probably more aesthetically minded then necessarily practical. If it happens great, otherwise no worries

but…
I’m having an issue

if I put a styled button on the phone dash board , it does’t appear on my tablet.
and the virtual pin I used on the phone is free on the tablet.

if I put the styled button on my tablet, it deseapear from the phone …

as you can see on the video
before the loss of styled button, the app stop 10 sec.

@Blynk_Coeur You using the latest Local Server version? Or Cloud?

Both Phone and Tablet have same App? Is one of them iOS?

@Gunner
yes gunner, I am using local server ( server-0.34.0-SNAPSHOT-java8 ) and android apps on both

You MUST update everything (App, Server, Library) in order to take advantage of all features as they come out.

hm…
I was not advised