Joystick BLYNK_WRITE should always be called at 1sec interval.

Joystick BLYNK_WRITE is being called at 100ms when the write interval setting is still set to 1sec after adjusting the slider. 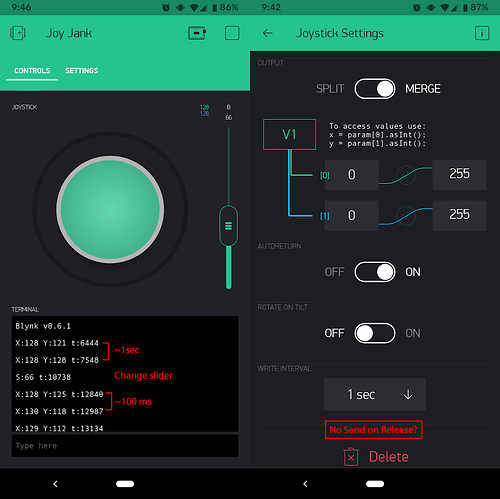 This line in the documentation leads to some confusion, as it mentions enabling “Send on release” when there is only a write interval in the joystick settings. I believe the interval was implemented later and it just wasn’t updated:

For example, when you move joystick widget, commands are streamed to the hardware, during a single joystick move you can send dozens of commands. There are use-cases where it’s needed, however creating such a load may lead to hardware overload and reset. Send On Release is a recommended setting for majority of applications. This is also a default setting.

These issues were just a few that I found mentioning something similar:

Hi! I am making a little project with an ESP8266 and servos. If I control the servos via sliders, everything works perfectly. But if I control them via a Joystick, it works for a while and then it stops responding (but sliders always work perfectly). Is there is any known issue with the Joystick control not updating the values?

Trouble with joystick after updates Issues and Errors

Hm, yep, i think bad mobile signal could cause such issues - as if it drops and returns - on return app makes relogin and loads latest saved profile - that’s why it could return slider to previous position. We’ll need to think how to workaround such issues.

My setup is a little unorthodox as it’s a bluetooth module wired straight to Serial in direct connect mode (through an accompanying voltage divider/capacitor and a transistor to invert the HC-05 state pin for auto reset). This allows me to wireless program the arduino pro mini over the same serial device since it does not have usb (hence the 57600 baud rate set in the code and also in the HC-05 AT settings). However that doesn’t seem to be related to this issue, and is instead an app UI issue. I can provide a schematic for anyone who is interested, as this was an awesome little hack that works great. The limitations are: 1) No blynk debug without a seperate software serial, which is why I’m using terminal.print() instead of Serial.print() here. 2) The slower baud rate limits how complex your app is and the number of widgets and relies heavily on intervals and timers to not overflow/flood the buffer, which is why a joystick spamming at 100ms is undesirable.

Did my last hope of due diligence and joined the app’s beta program.
No go with version 2.28.0, same issue.

To summarize there seem to be two issues in the app:

Thank you for a such detailed report. I will this thread later when the issue will be fixed.

Of course! The result of being a QA engineer in a past life and the persistence of debugging till it works. Honestly I don’t think I would have figured it out if it wasn’t for the hardware limitation in this setup which was causing crashes on the real sketch.The closing of the app part to reset it was driving me crazy and the hardest to pin down, since it would work sometimes and not others. Mainly after returning to the debugging after hours of banging my head against the wall haha.

Thanks for everything, this app is incredible and I know what it’s like keeping something as complex as this maintained!

Honestly I don’t think I would have figured it out if it wasn’t for the hardware limitation in this setup which was causing crashes on the real sketch.

Right, actually we added this write frequency for BLE/Bluetooth widgets, as they usually cant handle lots of write commands, which can be produced by such widgets.

Super cool catch. I will upload tomorrow a beta update with a fix to this issue.

Sounds good, I look forward to it! Thanks again for the quick response and fix. Always open to further QA testing if needed too

I will upload tomorrow a beta update with a fix to this issue.

No crashes on my real sketch either so I couldn’t be happier! Will hopefully share the full project with the community when I have a little more time to polish and do a proper write-up.

Thanks again for the speedy fix, I really appreciate it!