I’m a noob wanting to use a Wemos D1 mini + arduino IDE to open my garage door. The issue I’ve got is getting a relay to act like a momentary push switch. In the Blynk app, its fine. Just set the button to ‘push’. The problem is, I also want to be able to open/close the door using IFTTT webhooks. This works, however it latches the pin high = relay latches closed. I was hoping to use some code to get something like webhook pulls virtual pin high - code in Wemos detects pin is high - runs a loop pulling the digital pin high for a second then low again.

I’ve looked for an answer in these forums, but still haven’t been able to pull it off. I’m not a coder at all, the following was copy/pasted from other projects here, but doesn’t work. I’m sure this is a fairly simple task, can anyone help?

Far simplier than you think. EDIT: just read over your questions again and made an edit below

This wins hands down for me:

rather than this gibberish, but I’m not known for concise code

But you know the format looks different but tis the same code basically.

Appreciate the input guys. I had a few issues, but managed to get it working. I’ll write down my experience for anyone else who may stumble across this in the future.

The code didn’t seem to work initially, although I figured it was a problem with the pinout declarations(?). After much testing I found that the following wasn’t working for whatever reason.

I have no idea what I’m doing wrong here, but if I put the pin names (D1 and V1) directly into the rest of the code, things started working.

Adding the ‘==1’ got the relay to latch, but it wouldn’t shut off again.

I’m a bit worried to paste what I did next, as using a delay function seems to be like swearing in public around here. Nevertheless, removing the timer code and replacing it with delay finally got the relay to unlatch.

And it worked! The code may be the equivalent of a donkey pulling a porsche, but it does what I need it to. I’m an extreme beginner at this stuff so hopefully this post will help somebody in my position one day.

Thanks again for your input Jamin and Costas.

I believe the correct way of doing this would be…

No delays, garsh darnit or we kick your donkey

outta here (but we keep the Porch

Actually very short delays CAN be used, as long as they are not cumulative or large enough in of themselves to cause a heartbeat timeout (generally even 1-2 seconds can start causing potential issues)… @Jamin’s solution, while so condensed into uber coder shorthand as to be indistinguishable from magic

… would have better suited your needs, and allowed for a non-blocking relay latch ranging well into multiples of minutes/hours if needed.

And, yes, I know it is pronounced Porsche… silly little cars… Lamborghini all the way!

Both statments are TRUE when the button is held down.

Adding the ‘==1’ got the relay to latch, but it wouldn’t shut off again.

Try my code again. Its flawless… just make sure you have the widget set as “PUSH” and not “SWITCH”.
If you have set it to push then you have no reason to use virtualSync since when you release the button it goes back to 0/LOW.

Also @GTT is correct as below since these vars will never change.

I believe the correct way of doing this would be…

Be sure to always use the GPIO pin number and not the printed digitalpin reference (ie D1, D2 etc).
Also on the WeMos its best to avoid a few certain pins. I cant remember which ones but bascially D4, D5 and the pins you should use on your projects first. So if you use D4, the declare should be int outputPin = 2; ie GPIO02

Looking back at your original post, and noticed you have not started the BlynkTimer.
Probably the cause of your issues and why my code snippet didnt work for you.

I have no idea what I’m doing wrong here

For future reference, you’ve defined an INTEGER type variable, which (as far as Arduino is concerned) is a whole number between -32,768 and +32,767
Obviously “D1” and “V1” are alpha-numeric combinations that don’t fit this criteria, so can’t be stored as integers.

Hi, sorry to bring this thread back to life, but this is exactly what i’m trying to recreate. Another Gavin, another garage door, another person with very little knowledge stumbling along and copying code to make things work.

As a basic setup i’ve had it working where i can switch the relay on and off, but would like to turn it on, and after a few seconds it turns off automatically.

So far testing with the above suggestions it looks like my relay starts on, flickers very briefly and stays on.

Any help would be greatly appreciated.
Gav 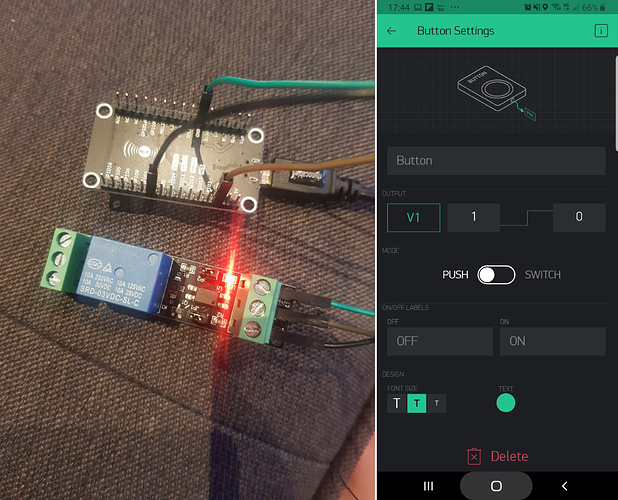 @Gavin_Randall, you are close but you have a few things wrong.

Give the below a try, and see if you have any better luck. If the relay behaves opposite of what you are expecting, you may have to switch some stuff around.

Post several secs too late and be duplicated. You can try @Toro_Blanco solution

Try this code, but you need to change either

Thanks so much to you guys for replying so quick! These examples have sorted it. Doing exactly what i wanted it too and is now ready to be installed.

Some great info on the GPIO Pins which i feel i may have read before, or should have known… but didn’t. That will definitely help with the next project and may explain why some past projects weren’t working too.

Thanks again to both of you!!!
Gav