Show device status on every widget

@Pavel, @BlynkAndroidDev, what about implementing a feature, that all widgets which hardware is offline, to appear with grey color (like disabled items)?

in bigger projects with multiple devices we have mixed up widgets in the tabs, so it is hard to remember which widget is associated to which hw. so, i can see in the list that there are 7 devices offline, but i do not know which widgets are actually affected. 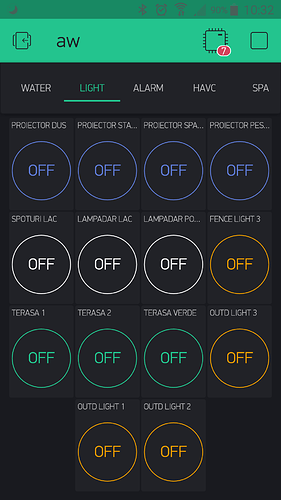 this feature would be generally useful for display widgets (if it is grey, the user can know that it displays non-relevant data), and for buttons too: even if the user change the status of a button, he is aware it will have no imediate effect on the hw, if it is grey.

it would be hard to implement this? what do you think?

I like this idea. @Eugene @Dmitriy what do you think?

I think it’s a great idea. I’ve implemented something similar in Node-Red where I ping the device and if it doesn’t respond I change the Blynk button widget text to “Offline” and change the button colour (in my case to an amber colour as a warning, although I did try grey to begin with and it was okay).

You’d probably need to do the same thing for other controls (sliders, joystick, zeRGBa, step H/V).
You might also want to give the option to prevent changes whilst the device is offline. Without this someone could change the state of a control on the server then be caught-out when the device comes back online and re-synchs with the server.

Nice one. However, our todo list right now is pretty huge already

i see. thanks for considering, anyway