Show all device in one dashboard

Hy Blynk, Can I see all device in one dashboard in blynk 2.0? 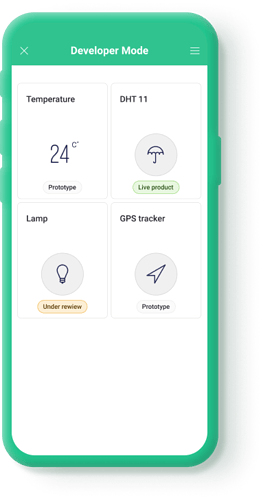 Other platforms allow you to have multiple devices shown on one chart/graph. That might be what they are asking about.

Do you mean control multiple devices using one template ?

Hi Giovanni93 I intend to “group” several devices together in a single dashboard panel, without having these tiles panels.

Blynk IoT/2.0 seems more targeted to have several views/dashboards for one device each, rather than one view/dashboard for several devices which probably is the more common home system use case.

A dashboard only supports to view/display from 1 device.

But there are ways around this.

How to?
There are several ways. You can communicate between “physical device” and “blynk device” directly using UDP or any communication protocol of choice.
You can communicate more indirectly by sending via MQTT to a broker and then to Node-RED which has an integration with Blynk 2.0 (and original blynk).
I also beleive, but have not tried, it is possible for any device to read/write from/to the DATASTREAM using API from more than one device.

The above are ideas and ways to have data from more than one physical device in one and same Blynk Dashboard. Which many home users want.

It may be more complex than the normal straight forward blynk “published methods”.

// I have switched to the Node-RED method. Works very good.

If not wanting to use Node-RED, it is also possible, and decently easy to let all physical devices send via MQTT to any broker (own or cloud). You then have one device (esp8266, esp32, etc) which subscribes to the MQTT messages and communicate “as one device” to Blynk 2.0.

The idea is really; You need an “integrator” or “concentrator” function collecting data from all your devices before sending to Blynk.

// of course, this is only needed until Blynk team decides to support several devices in one datastream. Which I wish they will.

Using the HTTP(S) API to simulate the Bridge functionality in Legacy, and using this to send data from multiple boards to a single Blynk device - which acts as a data accumulator- is probably the easiest approach.

Maybe I expressed myself wrong, but the problem I describe is “graphic” or having a free graphic dashboard without using tiles for each device

ok thanks. i will try with node red

You can use automation which is the easiest way, or blynk API.

I didn’t say that you were using Blynk Legacy. I was explaining a method which could be used in Blynk IoT to transfer data between devices so that all data can be viewed on that one device.

i will try with node red

That’s by far the best approach in my opinion, as discussed here…

Update January 2022 Okay, it’s been almost 3 years since my last post in this topic, and things have changed quite a bit – so it’s time for an update…. New Blynk IoT Obviously, the main thing that’s changed since my last update is the launch of the new Blynk IoT system (AKA Blynk 2.0). This required some changes to the Node-Red contrib for Blynk, so a new contrib called node-red-contrib-blynk-iot has been launched. The current version of this contrib is 0.2.0 and the following warning… [image…

One can always discuss if the Node-RED approach is “The best” …
It do take some time to set it up as it requires a Raspberry PI (or any other computer), MQTT brokers (mosquito) and certainly has a learning curve if you’re not used to unix/linux operations.

But,
once it is up running. It works very good. It is really easy to add more and more devices etc. To integrate with any other 3rd party solutions like energy metering, electrical appliances, weather forecasts etc.

I am happy i switched to this solution.

EDIT:
It has also become my way to convert from Blynk Legacy to Blynk IoT/2.0.
Rather than to change from Legacy to IoT in my esp8266 & esp32 devices. I have instead:

I can then easily comprise data from several esp devices into one (1) IoT dashboard (or datastream set as I prefer to refer it to).

This has been my path to migrate to Blynk IoT. Not to replace Blynk Legacy with Blynk IoT in my devices but to change system architecture to let devices use MQTT instead.

I’m not a fan of running Blynk and MQTT code on devices. I find it far easier to run MQTT only.
If you want to send data and receive commands from Legacy, so that you can continue to use your Legacy app dashboards, then you can have both the Legacy and IoT contribs installed in the same Node-Red setup and get data from devices via MQTT and ouch it to Blynk Legacy, IoT or both.

In the same way, you can have your devices subscribed to MQTT topics to send control messages to them from Node-Red, and these messages can come from widgets in Blynk Legacy, IoT, Alexa, Node-Red dashboard or any combination of the above.

That way, you have a truly interface independent system which allows Blynk Legacy to be replaced with IoT, or with a totally different front end at some point in future.