Problem with ESP8266 (NodeMcU) and DFPlayer

Here is my configuration:

All three ESP8266 (NodeMcu) works with the same virtual pine VPIN_PLAYTRACK V4, VPIN_MUSICPLAYER V5, VPIN_VOLUME V6 and VPIN_EQUALIZER V7. Every ESP8266 has its own “char auth”. I have changed the ESP8266 and the DFPlayer.

Does anyone has an idea why the number “Second” and “Third” did not work?

Here you will find the code:
(https://github.com/srikargodavarthi/HOBBY-KIT/blob/master/DF-PLAYER/BLYNK_DF_PLAYER.ino)

All three ESP8266 (NodeMcu) works with the same virtual pine VPIN_PLAYTRACK V4, VPIN_MUSICPLAYER V5, VPIN_VOLUME V6 and VPIN_EQUALIZER V7. Every ESP8266 has its own “char auth”. I have changed the ESP8266 and the DFPlayer.

What exactly does this mean?

could these be the Problem why the second and third installation did not work?

I don’t know, your statement makes no sense, which is why I asked for clarification.

Pete,
what is a solution why the second and third ESP8266 with DFPlayer are not working only sometimes random?

Can you show your setup please ?
How do you connect everything together, take some screenshots.

Hi John93,
the setup is the same at the Blynk App and wiring from ESP8266 and DFPlyer. Number „One“ works and then I customzed the „Second“ and it did work random. After that number „Third“ has the same problem.

Thanks for help
Michael

Are you connecting 3 DFPlayer to the same nodemcu ?

I have changed at number „Second“ the ESP8266 and the DFPlayer with the same software. The same problem as discribed. Is it a software problem in the sketch or a problem in the Blynk App?

Can you show me how do you connect all parts together please ?
Show me your wiring diagram.

Hi John93,
here you can see my wiring from the number “Second” ESP8266 with DFPlayer. I have changed the working micro-SDcard and it is the same result: 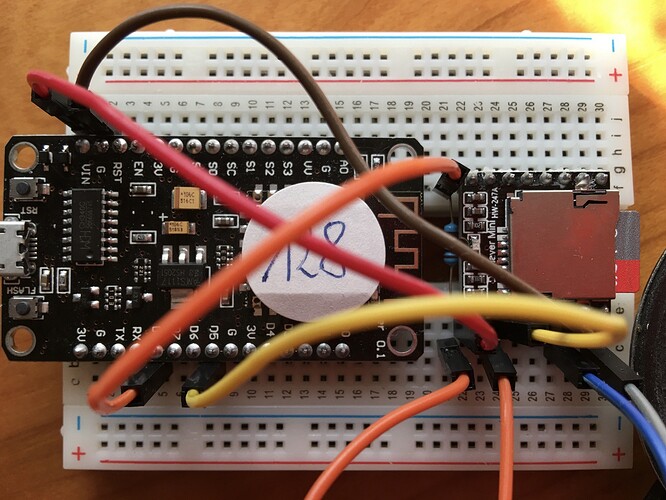 I think the sketch did not start the DFPlayer to read the mp3-files … But what is the reason?

Thanks for help
Michael