I am currently checking for princing, because I am still not sure if I stick with blynk legacy on local server or if I go to blynk2.0.

Does that mean that a “project” (like called in legacy) cannot have more than 7 ESP8266 for example on it ? Cause I actually use like 20 of them right now Oo

cannot have more than 7 ESP8266 for example

Device numbers vary according to which plan you choose… 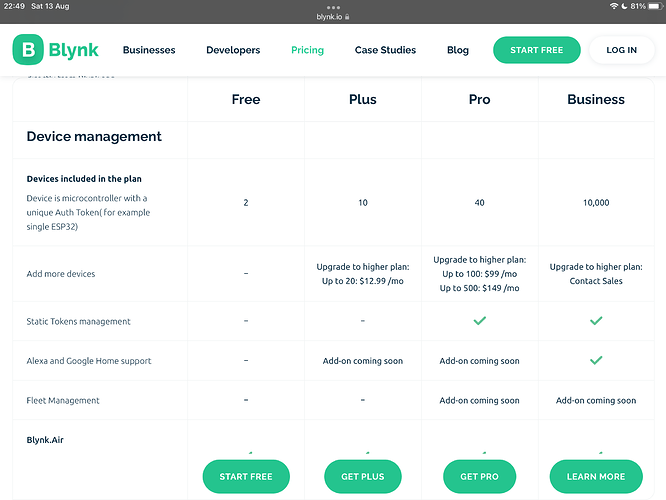 Thanks a lot.
And what about the project things ?
In the legacy app, we had something like targets :

So in a single project, we could pick differents pin of so many devices.
Cant find anywhere the same kind of possibilty in blynk2.0, am I wrong ?
Please tell me I am wrong =p

In Blynk IoT each device is represented by a separate tile on the front screen.
There isn’t (currently) a way to display data from one device on another device dashboard, or transfer data between devices.
There are some workarounds to this, such as sending data from one or more ‘slave’ devices to a single ‘master’ device using the HTTP(S) API.

The solution I use is to use Node-Red and MQTT. This way, Blynk only sees one device and Node-Red is used to aggregate and assemble data from multiple devices and this is sent to a single Blynk dashboard.

More info on this approach here:

Update January 2022 Okay, it’s been almost 3 years since my last post in this topic, and things have changed quite a bit – so it’s time for an update…. New Blynk IoT Obviously, the main thing that’s changed since my last update is the launch of the new Blynk IoT system (AKA Blynk 2.0). This required some changes to the Node-Red contrib for Blynk, so a new contrib called node-red-contrib-blynk-iot has been launched. The current version of this contrib is 0.2.0 and the following warning… [image…

Having previously used a local Blynk Legacy server I’ve made the move over to Blynk IoT, largely because the life of local server is limited. Removal of account creation from the app, and removal of the app from the App/Play stores has made life more difficult. The removal of “less secure apps” by Gmail has meant that emails from local server is no longer easily achievable. And, because the local server code isn’t being updated it will only be a matter of time before security vulnerabilities are an issue, and when Java 11 is retired then you’ll need to keep running the old (and vulnerable) version of Java to keep Blynk running.

For me, that level of inconvenience, potential vulnerability and uncertainty isn’t acceptable.

I agree with you for the big deal about security, when it come to professional matter.
But am using blynk for personnal use, in my home, for fun and dealing with simple IoT.

Could there be any risks in this situation ?

I also use Blynk for personal use at home.
Yes, if your local server is exposed to the internet (which it needs to be if you want to use your app anywhere, and if you want to send notifications), then security is a big issue.