Could you please tell me which way there is for us who are use old version of the bkynk in local server , in order to in some years the app not to work in newest android.

There are way to run old Android app on newest android?

The blynk developer is going to update the app ?

Someone have the code of the app so that someone developer do the update?

I believe the latest (last?) release was for Android 12. Should be fine for quite a while. Many of today’s phones will never get updated even to 12.

I know, I know. right now as much as I would like some of the neater UI features, I absolutely require private servers. The money is not the issue…the features are.

First Blynk is awesome!
It’s a pity that its app is not Open Source!
You have to move to Home Assistant or downgrade your Android)

Home assistant has a much more powerful web UI , but the android app is too ugly

Home assistant is a totally different beast compared to Blynk.
I took a look at it a while ago, and spent a couple of days wrestling with it, then again when trying to decide whether or not to migrate from Legacy to IoT.

For me, it’s just trying to do too much (especially with auto discovery) and it’s widgets are less useful than Blynk’s. It also changes its strategy and requires major reconfiguration after updates on a regular basis. You could argue that Blynk also does this occasionally, but certainly not to the same extent or as frequently.

And you have to pay for a cloud service… That’s why i made the step to Blynk from Virtuino long time ago, for it’s cloud server and stability.

Don’t compare home assistant and virtuino.
Home assistant is open source and totally free to use and there is a lot of script developed by community.
No cloud server, you need your own local server .
And this is one of the web UI example. 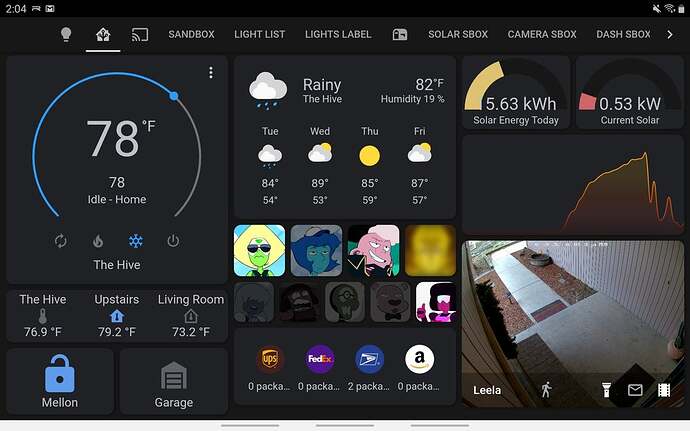