Hi. in the “Labeled Value” widget, when the measuring “Units” is Liter, l, the l letter will be automatically deleted from “Value” field so it will display /vaue/. (without the l letter). In this case the real value will not be displayed, just the /vaue/ word.
The same with any other letter, if the measuring Units is Watt [W], the capital W will be eliminated from value field. Kind regards.

What version of the Blynk Android app is this?

A few screenshots may make it easier to understand the issue.

As you can see, the l letters was eliminated, the k letters is ok, because the “Units” is Liter, l
If I set the measuring “Units” to something else, the value is displayed correctly.

In Blynk Legacy, the “/value/kkk” setting was used as a way to define the formatting (number of places after the decimal point etc) and add suffixes like °C

In Blynk IoT it seems that the intention was to remove this from the widget settings and handle the number of decimal places and the suffix in the datastream setup. The suffix is defined by the Units type that is chosen.
As a result, the “/value/kkk” formatting option was removed from early versions of the Blynk IoT app. However, this caused problems if the desired Units type wasn’t available in the pre-defined list, or if someone wanted to add a custom text to the displayed value. I believe that this is why the suffix formatting option was re-introduced to the IoT app.

However, I don’t think that the Units option in the datastream setup and the suffix formatting option ate intended to be used together.

Maybe if you amended the datastream setup to choose “none” for the units then handled all of the suffix formatting in the labelled value it would give the desired result?

If I’ve mis-understood the issue then maybe further explanation and more screenshots are needed.

You understood correctly the problem. I want to use the suffix from the datastream setup, where I set the Liter, l. In this case, from the suffix is removed automatically the “l” letter, which is correct, but the “l” letter is removed also from “/value/”, not just from the suffix, that’s why I remain just with the “/vaue/”, not “/value/”, as you can see in my attachment, and the value is not displayed anymore. This happens just with the Liter, because of the small l letter. 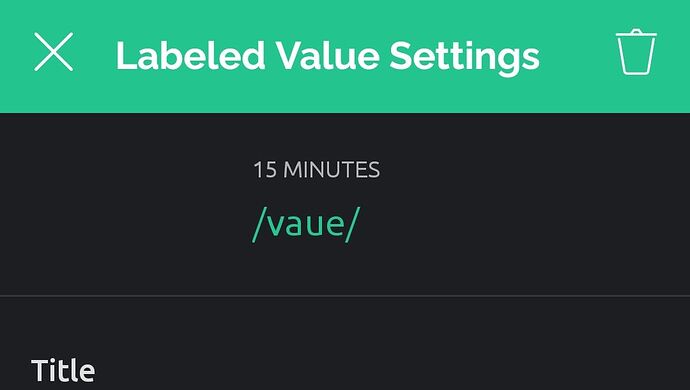 I really don’t understand what you’re saying, but hopefully the Blynk staff will have more luck understanding the issue.

W will be eliminated from value field. Kind regards.

Hi.
Bug confirmed, submitted data for fixing. Thanks for informing.

Thank you very much.