ESP8266 connects to wifi but Blynk app is offline

About a year ago I’ve created a garden watering system that was activatable through the Blynk app. It was all going well until recently the ESP8266 stopped working and I bought a new one to replace it. I flashed the updated firmware and got positive results when typing AT. Though when I try to run the code I once had, Blynk never manages to come back online on the app.

The problems I’m currently facing are the following:

A bit more info I have:

Any help or guide in the right direction is greatly appreciated!

I assume that your using SoftwareSerial to create a software UART to connect your Uno and ESP?
What baud rate are you using for this connection?

The lack of connection to the Blynk server could be down to your ISP blocking the Blynk traffic, or port 80.
One way around this may be to change your connection string so that you force it to use port 8080 instead.
It may also be worth re-generating the auth code for your project in the app and using this new auth code in your sketch.

Quite a but of guesswork here though, without knowing more about your sketch and the hardware setup

It could also be a power issue, so knowing how your ESP is powered (hopefully not from your Uno) may provide some pointers.

I am indeed using SoftwareSerial to connect to my UNO and ESP. Baud rate is at 9600, since I’ve read somewhere on the internet ESPs work better on 9600 than 115200.

I doubt my ISP is blocking the Blynk traffic, as it has always been working for a year now.

How could I change my connection string? The way I’m connecting to Blynk is through Blynk.begin(auth, wifi, ssid, pass); and I do not a see a way to change such a string. The best would be to test this through another device like my computer to make sure it works.

I’ll try to regenerate an auth code, as that has not been changed once since setup last year.

The sketch is way too long to post here, but here is a trimmed version that tries to connect to wifi, and then connect to Blynk:

It could be a power issue indeed, but I also doubt that. I’m running the ESP from an adapter for the ESP that runs off of 5V from the Uno. Again, it has always worked for a year, I doubt that is the case. I’d like to try other solutions first.

Do you think the AT versions might be related to this?

How could I change my connection string?

I’d start by trying this, as blocking port 80 is quite common. Restarting your router if you’re having issues is also a good move.

I’ve updated the token and added your change. Last line prints [8145] Connected to WiFi , but Blynk app is still offline.

I also just remembered I managed to get Blynk to be online once some days ago. So I guess the connection string shouldn’t bea problem, unless the connection got interrupted by the ISP or something else. Unfortunately I did not see the app online, but I could see the Offline since had updated to the day and time I was testing things out with the new ESP.

Just so I know: if Blynk manages to connect, does it print something else to Serial or will Connected to wifi always be the last info?

if Blynk manages to connect, does it print something else to Serial

Yes, with #define BLYNK_PRINT Serial enabled you should see something like this:

Try commenting-out this line and see what changes:

Unfortunately, this is all I’ve been getting lately, even with that line commented:

Hello, I’m using NodeMCU on the Arduino software for my project on the gas detecting part, and i am trying to get the data from Blynk application… but i keep receiving on Blynk (Connected then after few seconds disconnected) and when i press the play button it gives me offline ? does anyone has any idea what could be the problem?

@Alaa98 please edit your post, using the pencil icon at the bottom, and add triple backticks at the beginning and end of your code so that it displays correctly.
Triple backticks look like this:
```

Thank you for responding, done i edited it.

keep receiving on Blynk (Connected then after few seconds disconnected)

I don’t see any Blynk connected or disconnected messages in your serial monitor screenshot (BTW, it’s much better to copy/paste the contents of the serial monitor and use triple backticks when posting this data as well).

and i changed the port to 8080 but still the application is offline, but i also do not know why when it is paused, the application keeps sending like a notification saying: connected then disconnected every 6 seconds approximately

the application keeps sending like a notification saying: connected then disconnected every 6 seconds approximately

I don’t really understand what you mean when you say "the application keeps sending`. Is this appearing in the app, or the serial monitor?
If it’s the serial monitor then you’ve not shown those messages in the data you’ve provided.

What debug level did you select when you compiled the sketch?

i did not select any debug level, what should i pick?
and this is what i meant about connected, disconnected … 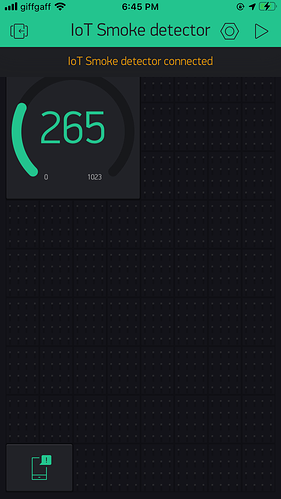 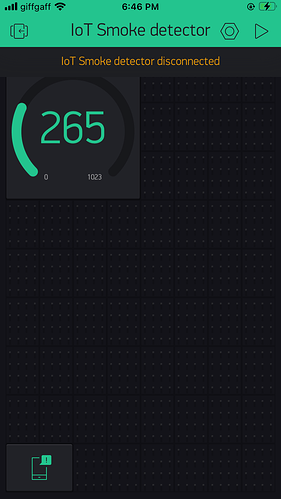 i did not select any debug level, what should i pick?

The serial monitor output isn’t what you’d normally see, unless you selected something like WIFI for your debug level.

Can you post a screenshot of your Tools settings in the IDE? 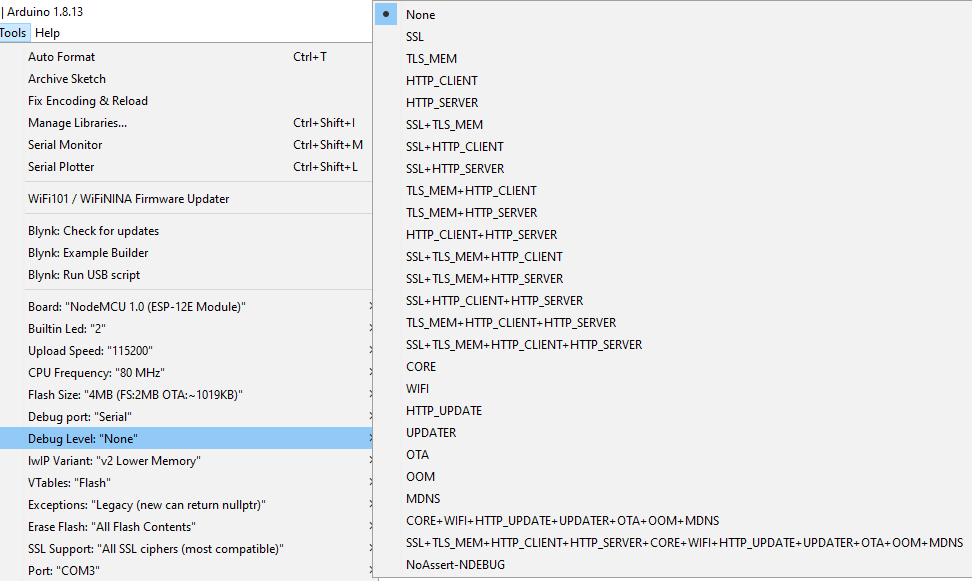 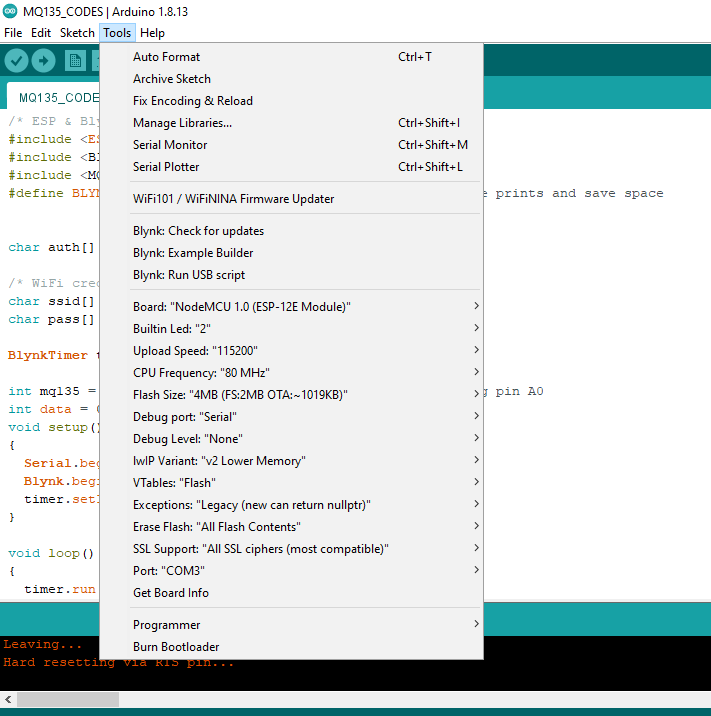 Very strange!
Do you have another NodeMCU you can try?

Do you see the same information in the serial monitor?

Normal Blynk serial output looks very different to this, and the only time I’ve seen this type of output is when a debug level is chosen. If you have ‘none’ selected as your debug level then something strange is happening.

i didn’t type anything to appear for me in the serial monitor, it’s either the application problem or something in the tools bar is missing somehow…