Connect your existing RF devices to the internet with Blynk

It is supposed to be opened from mobile app. It shouldn’t be open from PC.

It doesn’t work from mobile either. Just checked.

@Dmitriy and @Pavel the link was created from an Android device (Samsung S3) and when I click the link from my Android mail box the url works fine and Clones the project.

So maybe not a bug simply operator error on my side?

Are the cloning links available for general use or are they specific to the sender / recipient?

Ok so what does the App do?

Well perhaps it might be worth saying what it doesn’t do first. It will not open the car doors on your neighbours BMW or Mercedes even though they normally use the same 433 Mhz frequency. High security devices use rolling RF codes so the signals are slightly different each time a signal is sent.

That doesn’t mean the App will not work with any security devices. We have a ‘security’ barrier at our property and the App is able to control it.

The App comes pre-configured to operate with a selection of common RF devices.

The most common device is probably the Status Mains Power Sockets which is similar in operation to the Nexa sockets. Years ago they were for sale in Morrisons in the UK at just 5 quid for 3 including the remote control. So these days they are probably available in Poundland for next to nothing. They are rated at 2900W so will take care of most household appliances. 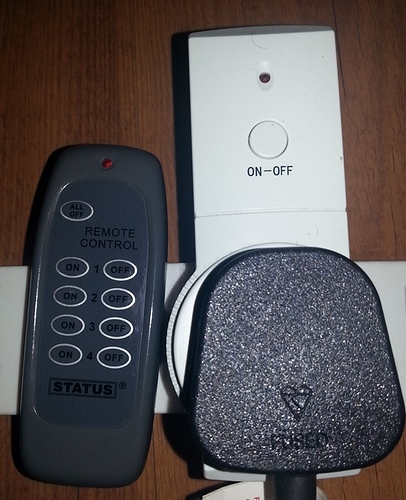 As you can probably see from the photo you can have 4 sockets for each remote control and all devices can be switched off from a single button. Maybe to prevent power surges the regular remote doesn’t allow you to power up 4 sockets from a single button. With the Blynk project this limitation is now a thing of the passed but do take care not to overload your sockets i.e. distribute them around the house. 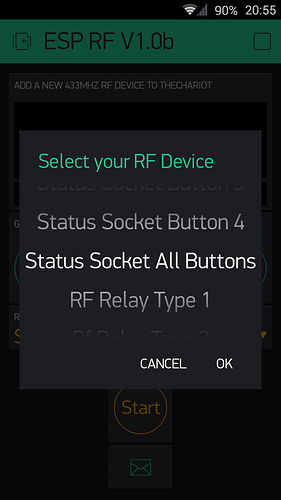 Although the Status Sockets are reasonably well made the regular remote control is not exactly built to last. Some of the buttons on our remote control barely function and we have only ever used it for testing purposes, albeit a lot of testing. With the Status and Nexa type mains Sockets you have to pair each Socket to a button on the remote control. Now you have an ever lasting remote control that will not wear out over time and can be used to pair the devices.

The App is also preconfigured to work with the learner RF activated relays as shown in the picture below (30A 85V to 250V). Simply put the device into learning mode and send an ON signal from the App. 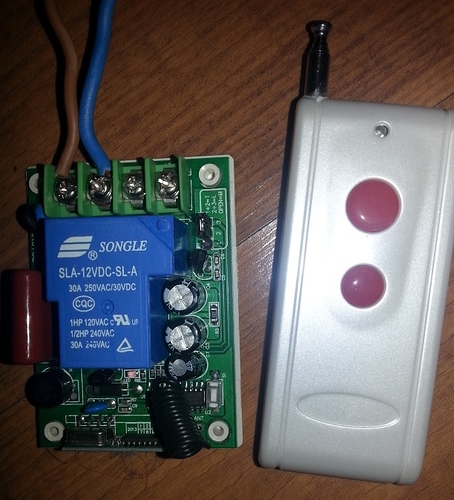 The App has an entry for a Siemens RF Controlled Thermostat which will be coded up in due course but one RF Controlled Switch that it does already work with it the Home Easy HE105. So if you have one of these you can now switch it on and off via the internet (no need to splash out on Google’s Nest or British Gas’ Hive Thermostats).

Well that is up to you. Follow the Terminal prompts in the App to send ON and OFF signals to us for your 433 Mhz devices and we will decode them, if possible, and add them to the App for the benefit of all.

Very nice Costas. I am very interested in what you are doing here. I have 10 RF devices setup at home which I can control reasonably well with my iPhone. I have been able to setup with Homebridge running on a Raspberry Pi2, so I can can use IOS HomeKit apps (I use Insteon). They were originally outlets similar to what you show in the pictures (4 still work that way), but I modified 6 of them to work as wall switches, which works better for me.

Setting them to be controlled through Blynk rather than having a local sever would be great!

@lfbaron we would be pleased to try and add some or all of your RF devices to theCHARioT.

We can probably send you the hardware free of charge providing you don’t live on the moon.

The collection of RF data by the ESP is very sensitive and we have tried various different approaches to collect the data. At one stage we were ensuring the ON or OFF button on the remote control was pressed before the data collection started in the app. Furthermore we continued to hold down the button for several seconds to try and collect a full signal.

The App will indicate if it failed to capture the RF signal and it is simply a case of trying again. The Value Display Widget labelled RF SIZE indicates the length of the signal captured and ideally it should be in the range 600 to 1000 but the App will accept > 200 as a successful capture.

The larger the captured signal the more chance we have of decoding the signal. As you are probably aware the RF signals are generally repeated several times, even as many as 20 times, to ensure the signal is received correctly. So a lot of the captured signal is simply the same data repeated over and over again but some equipment is quite specific about the number of times the signal is repeated. In the full App we have a slider to set signal repeats from 1 to 20 with 10 being fine for most devices.

Once an RF signal has being successfully decoded and added to theCHARioT the RF signals that are sent are very reliable. Better than the original remote control in many cases and with the extra benefits of being able to control the hardware via the internet and much better scheduling than most of the original manufacturers provided with their equipment.

@Costas I do have a spare set of RF transmitter/receiver and have a cheap version of the D1 board - although it only works intermittently, so I am not really using it. Thanks for the offer to send hardware. I am in Miami, FL. and can always buy some hardware if needed.

I have the RF data (on/off codes) for all my devices. Is it possible to add them manually rather than have the app go through the “learning” process? It would greatly simplify things.

@lfbaron message me with the make and model of the RF devices together with the ON and OFF codes and I will see what I can do. The ON and OFF codes alone are not normally enough as there is a timing issue to cater for as well as the high and low signals themselves. We can probably knock up a version of the app for you to modify the timing with a slider until the signals are accepted by your hardware.

@Pavel does the QR code work with your iPhone i.e. is it just the url from an iPhone that fails?

@Costas is this procedure still working because it has very old blynk library as reported during the booting at the serial…? I tried very carefully this procedure but seams that I can not control the WeMos app from my Android blynk app (it says that it is not connected, WeMos at the serial channel reports connection to blynk server (are you use the new one?) but no communication between WeMos & Android blynk app as I stated). Please offer me your explanation or your suggestions.
Thanks and Best Regards,
Mike Kranidis

@mikekgr I have worked through the original post again this morning and it looks like some of part of the OTA procedure might have changed. Where it states:

Once you have downloaded the bin file and uploaded the sketch above Serial Monitor should give you the following prompt:…

I couldn’t connect to the ESP with http://theCHARioT.local/update.
First I had to make a WiFi connection to an AP created by the ESP (ESP_XXXXX) without any password.

I then used the standard IP for ESP AP’s and the following url allowed me to select the bin file:

The library version used in the bin file is 0.3.4 but it does connect to blynk-cloud.com:8442 rather than the old .cc server.

If you are able to get this far and still have problems let me know and I can probably upload a bin file with the latest Blynk library. Please indicate what problem you have though.

@Costas Dear Costas, yes I am at the point that I have installed your bin file, rebooted, I saw the blue led constantly on, the ESP is connected to my router (it takes IP), I have many times checked the Blynk AUTH … BUT I can not see it connected to my Android Blynk app. (I also change the Blynk AUTH for test --and I reinitialize your applications given the new Blynk AUTH).

I couldn’t connect to the ESP with http://theCHARioT.local/update.First I had to make a WiFi connection to an AP created by the ESP (ESP_XXXXX) without any password.

I then used the standard IP for ESP AP’s and the following url allowed me to select the bin file:

I confirm this. I already did tho

@mikekgr after you have made the initial connection with WiFi Manager and entered the required details if you reset the WeMos whilst it is connected to Serial Monitor does it show something like this:

Where xxxxxxxxxx is the specific token being used by the Blynk app on your Android.

I have tested a new version with Blynk library 0.3.7 that I could let you have but if the original one doesn’t work for you I don’t think the new one will.

@Costas I am not at home now but I remember that it was like this (at least at the last lines, so from there I saw the old blynk library). I will cross check again but I believe that it was quite the same…

OK, but it is more the first part from Mounted file system to parsed json that is important.

I will provide QR code and links for the following version shortly. It is the same as what you have but with Blynk 0.3.7 library and specifically for WeMos. You might want to try it when you are back home. 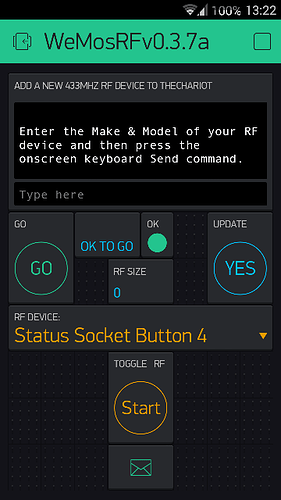 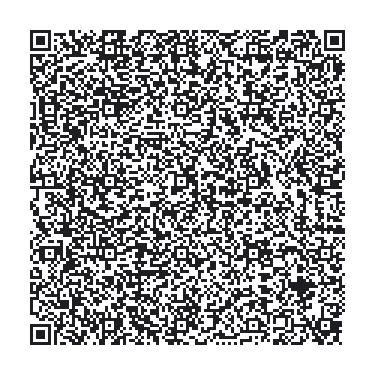 Link for app, instead of using QR code, http://tinyurl.com/zbhrcjb (access from browser on Smartphone).