I received the notification from ‘Mariia’ telling me that Automations have been redesigned, but I cant see any differences at all. I uninstalled Blynk IoT from my phone and reinstalled, but no changes. Had a quick look at the Web portal and no changes.

So have I just completely missed something really basic or are the changes to be rolled out in due course.

Hello. That’s true for the iOS app. Android is not yet fully rolled out (only 40% of users).

By the way - does anybody already tried it? How it is? Any feedback, as usually, is welcomed.

The Timer can be set to NN:NN:NN which i can assume is of the format HH:MM:SS. But this is not really indicated anywhere. Maybe nice to do.
[Minor]

Otherwise, usable. I could easily use this to trig by Movement and then activate a relay (lamp), wait 5 mins and turn relay (lamp) off.

I have not tested this in reality yet. My first wonder is of course how the automation and wait will work if there is a new Movement trigger during the wait. Will it prolong the ongoing wait with 5 mins or will it activate relay and add another separate wait which will be inactivated ( relay off) by the first trigger?

@jonas thanks for the feedback.

My first wonder is of course how the automation and wait will work if there is a new Movement trigger during the wait.

Nice question! The automation should not trigger until the initial trigger will be finished. In other words, a new trigger can’t be invoked until all wait events for that particular automation are finished.
This actually could be configurable, however, I’m not sure nobody needs this. We’ll see.

Thanks Dmitriy,
I am not at all an automation expert and i have really never used “waits” like this.

Maybe this is something you instead should code in device. (Avoid the first trigger to shut off the lamp, that is. So Automation would probably more be to reset a timer in device until lamp off.
Like this; on movement trigger, lamp on and set 1 minute timer for lamp off. If a new movement trigger is rised, lamp on (or by logic realize not needed) and reset the timer to 1 minute. Whenever timer fires, set lamp off. I guess this is how i should do it. => Rather “set a timer” as action by the automation than to set the “relay off” action.

// As said, i dont really know as i have never been thinking about such applications.

Agree. Total valid use case. @Pavel looks like we would need additional setting that may control that. WDYT?

The Timer can be set to NN:NN:NN which i can assume is of the format HH:MM:SS. But this is not really indicated anywhere. Maybe nice to do.
[Minor]

Are you referring to this? If yes then its showing on the top hours minutes n seconds.

does anybody already tried it? How it is? Any feedback,

It will be really good if we can add second when statement inside the same automation card. This way i have only one automation card per trigger. Like for turning on and off a device. This will tidy up things on the UI.

We have seen this on few apps already. We also used the same on Time input widget too.
Just imagine we have 10 devices that needs to controlled at various times of the day. Then the user will end up having 20 automation card, and have to dig through to get what he wants.

And also Having the option to add custom pictures(gallery) to the cover will be another cool feature. We can add our pictures of the current place that we are automating(balcony, room, kitchen) and can find the automation card easily just by having sneak peek of the cover instead of going through names, as we will have in plenty.

And also having the option to reorder the cards will be another nice feature. Lets say i will configure the 1st card to turn on device A. And later i go on configuring other devices. So again when i automate device A, that card will be in the last, so this way again the user has to dig through the numerous card he has.

So if there is an option to reorder or even group cards, we can reorder and keep things organised.

Yes, this looks good. “hours, min, sec”.
On my Android this is not visible.
(I assume you use iOS.)

I’m using Android 11 and can’t see them either.

Timer is very small and there is no scalable option
in the past with legacy blynk, we could choose the foreground and background color widgets 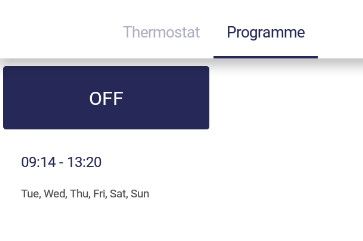 All other points are valid. Agree.

On my Android this is not visible.

Android automation screen will be redesigned in the same way as iOS. We just busy with another tasks for Android. So it will be fixed.

Yeah this can be done in many ways. But having a direct approach would be really good instead of having a walk around. I was thinking in a customer’s POV and end product. Customer has to calculate the number of hours instead of setting the time. We as a makers we are okay with everything

And for developers if there is an API to read the automation card (i dont know what exactly its called in software terms, correct me if i am wrong) . Like we used to get the min and hours from the time input widget. t.starthour(); t.stophour(); ….

This will make our life’s easier for sure. Is this possible to give us this option? Is this already in your roadmap?

This will make our life’s easier for sure. Is this possible to give us this option? Is this already in your roadmap?

This will be a part of “Offline Automations” this is in our roadmap, yes.

Definitely, it’s super complex and powerful we can’t give it for free

@Madhukesh you don’t need to calculate the hours. You can use wait till 4:00 am

I did not notice that.
Having start time n stop times like we have in time input widget will be easy on the customer.